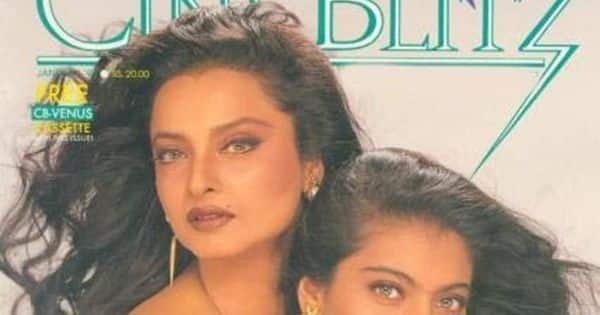 Bollywood has given audiences two dynamic divas in the form of Kajol and Rekha. Both have managed to carve out a place for themselves in the Hindi film industry and have become the most desirable women, thanks to their captivating on-screen persona. The two actresses never had the chance to share screen space together, but when they did, they rocked the industry with their steamy photo shoot in 1996. Read also – Happy birthday Kajol: Five times the actress spoke frankly about her daughter Nysa Devgn and proved that she was the coolest mother

After making her Bollywood debut with the 1992 film Bekhudi, Kajol became an overnight star with her 1993 thriller Baazigar starring Shah Rukh Khan. At that time, Rekha was already a superstar. In 1996, Kajol and Rekha teamed up for a daring photo shoot for a popular entertainment magazine. And that raised several eyebrows. Read also – Nag Panchami 2022: From Mouni Roy and Tejasswi Prakash to Rekha and Sridevi; Meet the most glamorous naagins ever

During the photo shoot, Kajol and Rekha were seen striking a comfortable pose for the cover of the magazine. They wore an off-the-shoulder sweater but what left everyone in awe was that the two divas donned the same sweater in the photo. While Kajol and Rekha looked stunning and sultry while filming, it didn’t sit well with their fans. They faced massive criticism for their steamy photo shoot that caused a stir.

However, the controversy did not affect the two divas. In fact, Kajol even joked about posing with Rekha in the same sweater when they met at Priyanka Chopra and Nick Jonas’ star-studded wedding reception in 2018. her daring photoshoot and possessed her like a boss. “Last time we clicked a photo together was in sweaters,” Kajol captioned the image.