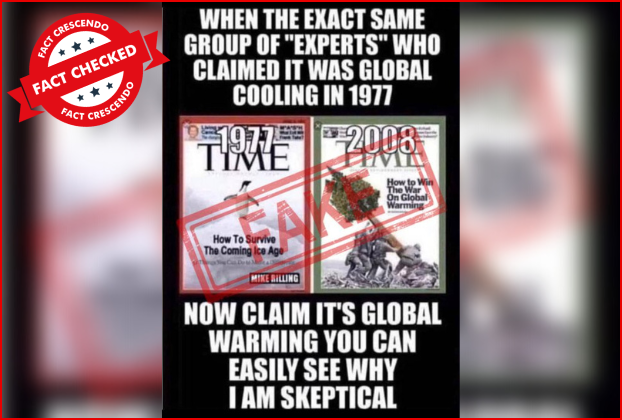 We continue to witness the consequences of climate change across the world in the form of wildfires, devastating floods and scorching heat waves. It is becoming difficult to deny the existence of day-to-day climate change as it affects millions of people around the world. Despite this, climate change deniers do not seem to be moving. While denying climate change, they often use disinformation as arguments.

A poster containing a meme showing a comparison between the covers of TIME magazine from the year 1977 and 2008 has reappeared on social networks. This misinformation has been spreading on social media for many years and comes up periodically. This time we found a Tweeter containing this meme.

The meme says: “When the exact same group of ‘Experts’ who claimed it was global cooling in 1977, now claims it’s global warming, you can easily see why am I skeptical.”

However, the 1977 poster is faked. TIME Magazine never published such a cover photo in 1977. Let’s know the truth.

We checked the archives of TIME magazine covers published in 1977. However, we found no such cover photo.

We did a keyword search on Google with relevant keywords gathered from the meme and found TIME magazine’s website refuting this fake cover photo in 2013.

According to the article, this fake photo has been circulating for a while. Also, this photo was made by editing the photo from another Time Magazine cover called “The Global Warming Survival Guide” published on April 9, 2007.

You can see the comparison between the modified image and the original image. We can clearly see that the text “The Global Warming Survival Guide” has been changed to “How To Survive The Coming Ice Age”.

Besides TIME, organizations such as Reuters and Climate Feedback have already debunked this misinformation. However, he still comes up frequently on social media platforms.

TIME magazine’s 1977 cover photo predicting the next ice age is wrong. The photo was created after editing a 2007 TIME magazine cover that read “The Global Warming Survival Guide”.